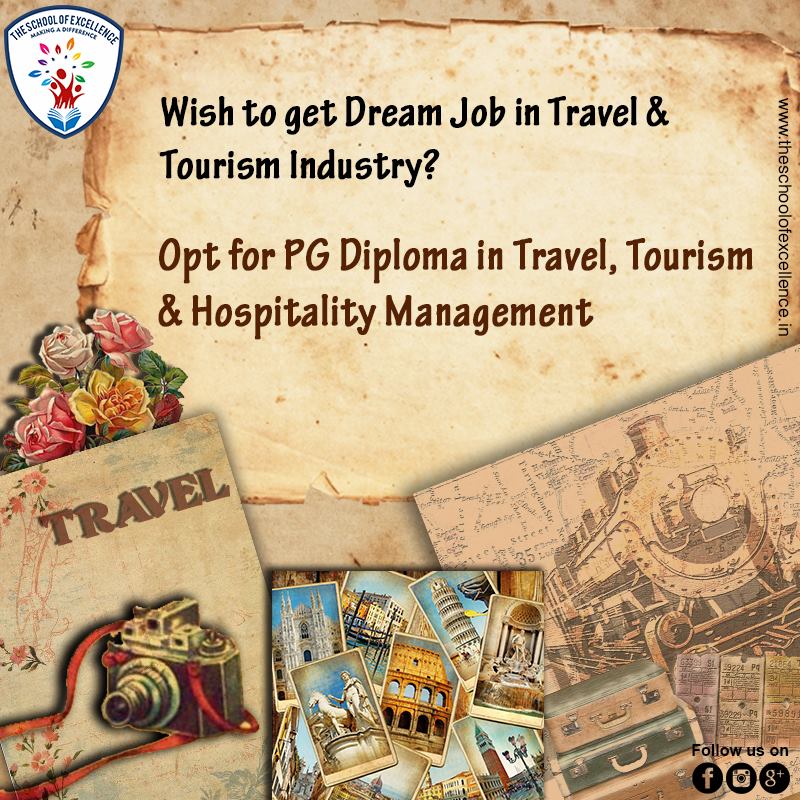 Certainly, tours can never be penned down & so is tourism, but have you ever thought of being trained to live a dream, which can be transformed to reality!!!….Yes you read it right, THE SCHOOL OF EXCELLENCE, exactly a place, rather a platform made to train dream wanderers like you & me who constantly are in search of an opportunity to grab….

It all began with the thought of unremitting passion to teach & an idea to groom an army of young & dynamic professionals to enter the challenging industry of tourism & aviation. Mrs Smita Gulvady, Mr. Pritesh Prabhu & Mrs Divya Edvankar, 3 Pioneers of the travel trade industry, form an organisation which can take a flight to many such hidden dreams. “I remember the day when I came across TSOE, I merely was a graduate with a few months of work experience just like an ordinary girl, it barely took me an hours session to create a path & a clear idea as to what would I do to develop as an individual. Well not only me, but also I met a group of similar individuals who were on mend of a similar shelter”. To count on fingers we were only 12, never thought that only a few strangers could be nit into a strong web on a tree of TSOE, ever heard an institute teaching you to be friends but yes we were taught, because that’s exactly the first step of touring or tourism, “Coz, though alone, u always travel with strangers, who never stay strangers, strange but true”.

FLASH MOB, EVENT
Like each & every institution, we did have a schedule, well that may seem like a school but ultimately so are the corporates, we did recognize the importance of time but with fun, heading to subjects we covered many destinations, presentations & projects which of course kept us engaged just as any & every Institute does but here comes the twisty turn, a project with graphics & presentations with interesting quiz games & destinations with Google maps & live experiences as discussions, well that just was the beginning, A bunch of 12 Idiots, managing & organising events for an staff of 80 people, shocking isn’t it!?, no celebrity, no glamorous designers or fashion artist, it was 12 of us who were the entertainers & organisers, from Anchoring to back stage management we all made it happen & the show stopper of the event a FLASH MOB performed by us for the entire staff of BCD on completion of 17 successful years of the brand, ohh!!! I can never forget the happy & cheerful faces of the staff as well the higher officials, especially the overwhelming speech of Managing director Mr Bali….remarkable…….

HOTEL TOURS
To elaborate on hotel visits, it was a crucial part of our curriculum; interactive sessions with the big hotel chains helped us develop our communication, presentational & interpersonal skills, we could grab a brief on functionality of the hospitality industry.

A couple of visits were organised by our institute to popular chain of hotels including, Hilton Mumbai, Hyatt, ITC Maratha, Holiday Inn, Taj Santacruz, Keys & a few more. Especially ITC Maratha organised a special training session for our batch covering different aspects of hospitality industry. Wow, well that was a great session, at the end of which we got a chance to taste the best of the chefs culinary. Soon we were surprised with a lunch invitation at the Taj Santacruz soon after our visit & that one of the luxurious dreams which we could live-up to…..

ASSIGNMENT METHODOLOGY
The best part about completing our given tasks, included a huge amount of market study followed by presentations on the same, this technique gave an idea on understanding the market functions & work pace, “it may seem easy but was hell of a task, now that was something, which indeed we had to learn, as we possibly would start working in the market soon”.

2ND INNINGS…
Beginning with the 2 innings, post Diwali Holidays, it was time for some serious work & exams, well that’s the phase which every student eventually has to go through………
Well it was time for some competitions, Fun events & more interactive lectures by professionals. I remember on world tourism day it was the first time for TSOE to participate & to win it, being honoured by India tourism board was indeed a great honour, we later had poster competitions & many in-house events which kept us engaged also different tourism boards, airlines & cruise companies including Philippines, South Africa, Canada, France, Australia, Royal Caribbean Cruise, Malaysia, United & Lufthansa came-over & briefed us with the destination with a couple of goodies at the end of the sessions.

THE BIG TRIP
Exactly the way it sounds, the big trip is a major highlight of the course as it was an exclusive idea that was put forward by Mr. Pritesh Prabhu the class in charge & bought in limelight by all of us, it was we 12 who planned the entire trip so as to exactly understand & drape into the business we were striving throughout to enter. Now this is definitely something that you can be looking forward for a fun at work & work with fun concept.

TOUR DETAILS & JOB PLACEMENTS
6N/7D Madhya Pradesh
Jabalpur…………..Kanha National Park…………….Jabalpur……………..Mumbai
From the beauty of a nature safari to the delicacies of Jabalpur, from the lights Narmada Arti “हरि ओम” in the dusk to the falls of dhuadhar & some “घाट के किनारे” shopping, to the late night antakshari to self-organised awards arranged within us which was similar to a mini award night & many clicks of the unexplored places & regions in just a week took us onto a different world whole together………definitely an unforgettable journey & a bunch of #tripdiaries#MadhyaPradesh#Colledgetrip#
Excursion, a bunch of memories to relish throughout our lives. Soon after our return journey to Bombay we all went through a bunch of on-campus interviews, which is an important feature of our course, eventually we all got selected in top-rated companies in the market, but the journey of TSOE was truly a rollercoaster of different flavours of a platter & a mesmerising journey of a year which will always be a part of each & every one of us…………..

Rightly said by 36th President of USA,
Lydon. B. Johnson,

YESTERDAY WAS NOT YOURS TO RECOVER,
BUT TOMORROW IS OURS TO WIN OR LOOSE

So come live your dream not for today but for a better tomorrow so that you don’t regret to not give yourself a chance,

TSOE
The School Of Excellence,
always has a door open for
Passion seekers, Explorers
& Travel Lovers

To create the best, to give the best