Skip to content
Having trouble sleeping at night? Maybe it’s time to have “the talk” with your phone and lay out some relationship boundaries.
Your smartphone is a loyal companion, helping you perform various tasks that a decade ago required a battalion of various technological equipment. It lets you stay in touch with friends, assists you in checking emails while you are out of office, and now can even talk to you!! A myriad of utilities all rolled into one sleek design, heck, it maybe the best thing since sliced bread. Though, it would go a long way for your health to avoid it before bedtime.
Staring at a screen before going to sleep is a major, although oft overlooked, factor in having trouble sleeping. Every electronic display around us, with the exception of a few e-ink displays, produces blue light, which disrupts the circadian rhythm that our bodies rely on to ensure that a healthy of dose of sleep is guaranteed. Since we tend to have our smartphones handy at all times and usually within arm’s reach even in bed, we often succumb to the temptation of picking them up as soon as that hotline blinks (get it?). One thing leads to another and what was intended to be a quick glance at your phone has you knee deep in funny kitten videos hours later, incredulously wondering how you ended up there in the first place.
If you are still “plugged in” to your phone when you should be powering down your brain is still getting cognitive stimulus from whatever activity you are engaged in. In addition to the increased cognitive activity keeping you awake, the blue light in the glow that the phone’s backlight emits plays a massive role in disrupting your sleeping routine.
So what is so special about Blue light? How is it any different from any other kind of light? Why doesn’t it let me sleep after I obsessively spend 2+ hours lying awake in bed, trying to beat the same annoying level in Candy Crush? The Blue light that screens emit triggers the Melanopsin1 photoreceptors in your eyes (yes, there are more than rods and cones in our eyes). The Melanopsin photoreceptors are particularly sensitive to Blue light and end up suppressing Melatonin production in the body that makes it much harder to fall asleep.
The Pineal gland in our brain starts releasing Melatonin as darkness sets in and bedtime approaches. This hormone is crucial in preparing the body for slumber and induces drowsiness, lowers the level of alertness and, generally conditions the body to be more receptive of some quality snooze time after a long day, until you have to go and ruin it all by being a jerk and picking up that phone.
In a research¬¬2 carried out in 2013 by the Rensselaer Polytechnic Institute, it was established that subjects that were exposed to blue light had significantly lower levels of Melatonin than those that had the blue light filtered by wearing orange goggles. A group of Harvard researchers3 found that exposure to 6.5 hours of Blue light shifted a person’s sleeping schedule by 3 hours and suppressed Melatonin for longer. Many individual and independent researchers have confirmed the adverse effects that Blue light has on chasing away sleep that your body needs to function optimally.
Is it going to be easy to resist the temptation of checking that last email? Swiping just one more time on Pinterest? No, it is not. However, you are not alone. According to a Time/Qualcomm poll4 a whopping 68% of people sleep with their phones by their bedsides. It is going to be difficult to wean yourself off the habit of checking your phone every time it beeps in the middle of the night. You could try
– Having a technology free bedtime ritual helps. Meditate for half an hour. Read a (paper) book. Anything that does not involve the use of a screen.
– Try turning your phone off for the night so it cannot lure you down the rabbit hole by beeping. If you cannot completely power it down, you could try keeping it on silent. Most smartphones these days have built in “Do not Disturb” routines that automatically disable all notifications and calls for a pre-set period of time.
– If things get really, really bad, consider leaving the phone outside of the bedroom. You need your space too, after all.
Still doubtful? Consider keeping a sleep log to track improvements to your sleeping routine post culling screen time in bed. P.S. If you are reading this in bed, well, tomorrow is another day.
References:
1. http://www.lrc.rpi.edu/resources/newsroom/pdf/2012-2013/iPad8511.pdf
2. http://www.health.harvard.edu/staying-healthy/blue-light-has-a-dark-side
3. http://content.time.com/time/interactive/0,31813,2122187,00.html
Author Bio: 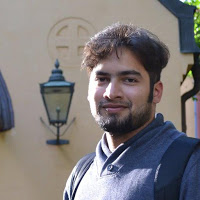 Eugene Gabriel has his BSc (Hons.) Degree in Psychology. He has always been fascinated by the effects of good quality sleep, or the lack of it on human productivity and overall well-being. He has helped thousands of individuals suffering from sleeping problems by teaching them about the healthy changes they need to make in their lifestyle in order to sleep peacefully. Read his post on coffee and sleep. You can also follow him on twitter @eugenegabrielj.