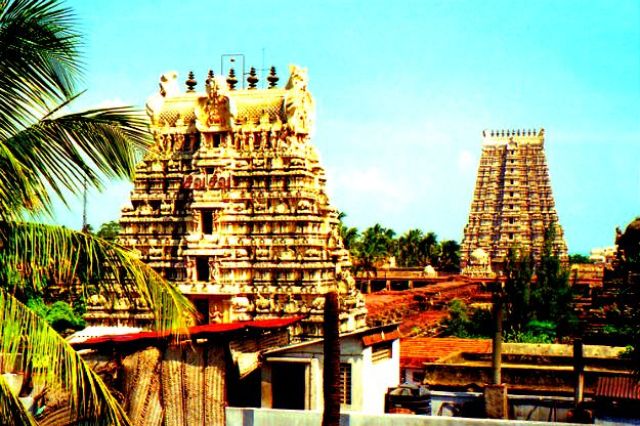 South India, a major part of the country that fascinates all with its mystique beauty, plush greenery and enchanting heritage sites and it also holds a significant stand in India tourism. The charm of south India can be well-described in the hues of green and gold. Housing several temples and architectural wonders, southern India offers a wide range of tourist spot options.
One such temple in South India is Ramanatha swamy temple which is located in Rameswaram. Just like many other temples of South India this temple is also highly ornamented with gold and glitters. It is an important pilgrim site for Hindus and it also completes the Charm Dham and Indian temple tours. As this temple is located in Rameshwaram, hence the shrine is called Rameshwaram Temple. It is one of the 12 Jyotirlinga of Lord Shiva. Famous for longest corridor temple in India, the temple was started constructed in 12th century by the Pandya Dynasty.
Architecture of Ramanatha Swamy Temple
Famous for its majestic and intrigue architecture, Ramanatha Swamy temple has huge granite pillars which supports the corridor, the corridor is comprises of more than 1000 pillars which makes this the longest corridor in India. The height of each pillar is approx 30 feet. Dedicated this temple to Lord Shiva, this temple was established by Lord Rama before he starts his war against demong King Raavana.
History and Myth of Rameshwaram Temple
According to legends, Lord Rama installed the linga here before he commenced the war against the demon king Raavan. He made the Shivlinga with sand and worshipped it and asks Lord Shiva to vanquish Ravana and his terror. Shiva blessed him accordingly. Lord Rama asked Shiva to reside in the Shivlinga so that entire mankind gets benefited by it.
Another legend has, on returning to Ayodhya after war, Lord Ram wish to worship Shiva to atoned himself from Brahmma Hatya as by religion Ravan was Brahmin, he asked Lord Hanuman to bring Shiv Linga from Benara, meanwhile Goddess Sita installed another Shivlinga and hence the place has two lingas, namely Ramalinga and Shivlinga.
Facts about Ramanatha Swamy Temple
Rameshwaram Temple in India is one of the prominent tourist attractions in South India. Trip to Rameshwaram also considered as most significant pilgrim site in Char Dham yatra. With huge significance in Indian temple tours, Rameshwaram has many facts from which you must be unaware.
1. This temple is also known as the Rameshwaram Temple due to its location on Rameshwaram Island.
2. It is believed to be installed by Lord Rama before he commenced the war.
3. The outer corridors are 6.9 meter high.
4. It stretches 400 feet to west, 640 feet to north and south.
5. Total there are 1212 pillars supporting the pillar.
6. The height of each pillar is 30 feet and is having intrigue carvings.
7. There are 22 theerthams (tanks) where devotees can take bath.
8. Rameshwarm lingam is one of the most prominent 12 Jyotirlinga of Shiva.
9. There are two lingams installed in here. One is believed to be brought by Lord Hanuman and other is believed to be constructed by Goddess Sita.
10. The temple is surrounded by huge fortification which makes a huge rectangle along with big pyramidal called “gopura” the doorways on every side.