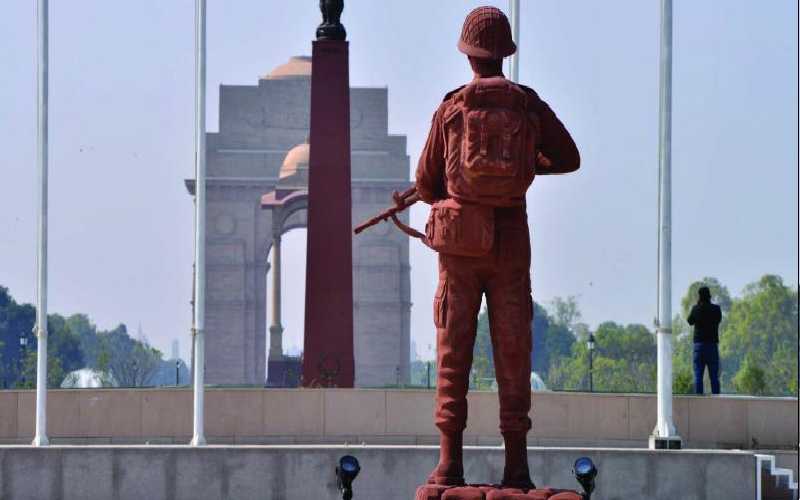 National War Memorial that commemorates the sacrifices made by Indian soldiers in major wars post independence, spread over an area of approximately 40 acres in India Gate complex behind Canopy in the heart of capital of India, comprises four concentric circles, namely- Amar Chakra, Veerta Chakra, Tyag Chakra and Rakshak Chakra with names of 25942 soldiers inscribed in golden letters on granite tablets, was inaugurated by Prime Minister Narendra Modi on Monday 25 February 2019, nearly 60 years after it was mooted to honour the fallen soldiers after Independence.

Prime Minister lit the eternal flame, to mark the dedication of the the National War Memorial in New Delhi, to the nation. Rose petals were showered by IAF helicopters and a fly-past in ‘Missing Man’ formation was also part of the event.

Prime Minister, earlier, addressing a large rally of Ex-Servicemen, said that it is the result of the valour and dedication of lakhs of soldiers that the Indian Army is today considered among the strongest in the world and added, that the soldiers have been the first line of defence, both against enemies, and against natural disasters.

Defence Minister Nirmala Sitharaman said the county now has “one more pilgrimage place” where citizens can come to pay homage to our brave soldiers, and added, “It has been wonderfully designed such that it homogenously merges with the surrounding; giving an impression that it existed ever since long. We can proudly say there is one more pilgrimage place for us Indians. We expect every citizen will pay a visit to this memorial to pay homage to our brave soldiers”.

“After World War I and the conflict in Afghanistan-Waziristan, a memorial was built in the pre-Independence era in the form of the India Gate. In 1972, the Amar Jwan Jyoti was built underneath it to commemorate the Indo-Pak conflict of 1971”.

Top 10 Indian Universities according to NIRF 2019