Know About The Most Expensive Bollywood Songs Ever! 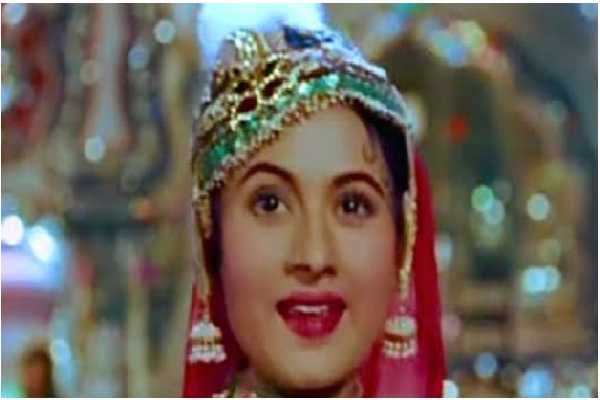 Bollywood is the most expensive film industry in the world and it’s lifeline is music. The preference of music has changed with time, but the love that filmmakers have towards creating the best music albums and videos for their films has always remained unchanged.

At times, the movies might turn into flops but the music albums become big hits. The entire process of shooting for Bollywood songs is a costly matter. The equipment, the cast and crew, the set, costumes, makeup, dancing professionals, teachers and playback singers add up to the expenses. Many of the crew members are from other countries. Not just the monetary expense, but the hard work behind it is also very tiring.

Read here, about the songs of India Movies that was the most expensive Bollywood songs of all time 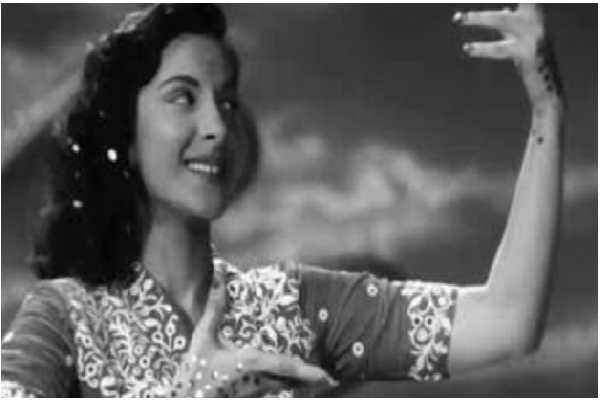 Movie: Awaara – the most expensive movie of bollywood

Awaara became famous all around the world within a very short time, especially in South Asia, Soviet Union, East Asia, Africa, Middle East and Eastern Europe. More than 2 million tickets were sold for it in different countries, including 1 million in China and 1 million in the Soviet Union. The entire soundtrack appeared on number 3 out of the 100 best Bollywood Soundtracks by Planet Bollywood.

The music video is like a magical 3D movie for the eyes. The audio visual effects are too advanced for the1950’s. It is said that this was the most expensive song in the film and was as worthy as the whole film. A surreal atmosphere has been built and Raj Kapoor as well as Nargis seem to be a part of it. It was so popular that even decades later it would remain at the top of the radio charts.

Most famous Indian Song in the world

Music: Naushad
Lyrics: Shakeel Badayuni
Singers: Bade Ghulam Ali Khan, Lata Mangeshkar, Chorus
Movie: Mughal-e-Azam
A historical song engraved in the golden history of Hindi Film Music “Pyar Kiya To Darna Kya” is considered to be the costliest song of all time. In 1960, a whopping amount of almost 10 lakh rupees was spent on it.

Naushad is believed to have cancelled two versions of lyrics written by Badayuni before setting up a brainstorming session on his terrace for several days, at the end of which a folk song from Uttar Pradesh called “Prem Kiya Kya Chori Kari Hai” came into his head. It was altered into a ghazal and then recorded.

The sets were made in such a way that they appeared like the popular Sheesh Mahal in Jaipur and even the costumes and make-up were thousand times more expensive than you can imagine. Revered singing master Bade Ali Ghulam has sung Tansen’s part and Lata Mangeshkar had to shoot in the studio bathroom because there was no technology for reverberation.

Most Famous Song in Indian Movies 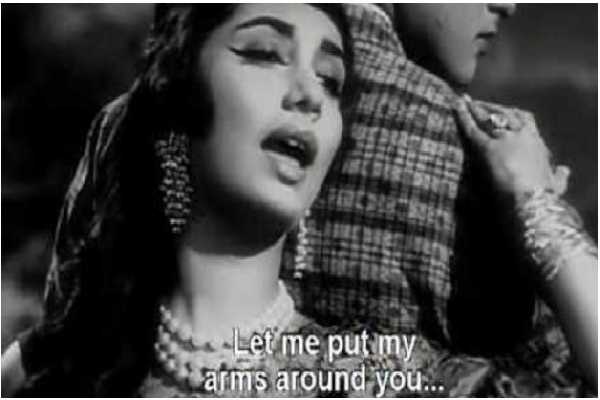 Music: Madan Mohan
Lyrics: Raja Mehndi Ali Khan
Singer: Lata Mangeshkar
Movie: Woh Kaun Thi
There is not a single Indian who hasn’t heard of “Lag Ja Gale”. It’s about to be 60 years old, but the way it casts it’s magic upon Indians, it is surely a gem of a song. It is worth an infinite amount of money and can make you shiver anytime you listen to it. Shot in the middle of a barren jungle in the dead of the night, Sadhana and Manoj Kumar’s chemistry, as well as the picturisation of the song, are iconic. It was quite an expensive song at that time.

Even now, the track is worth a fortune. In the old days, the copyright of old songs would be as cheap as peanuts but recently when Dhulia tried to purchase the copyrights of “Lag Ja Gale” for the sequel of “Sahib Bibi and Ghulam”, it cost him a fortune. He had to directly pay an unimaginable Rs 30 lakhs directly from his pocket. These songs can be reused in the film, but they cannot be incorporated in the form of soundtracks for other music companies. Madan Mohan, Mehndi Ali Khan and Lata Mangeshkar’s trio made something that nobody else has been able to remake. 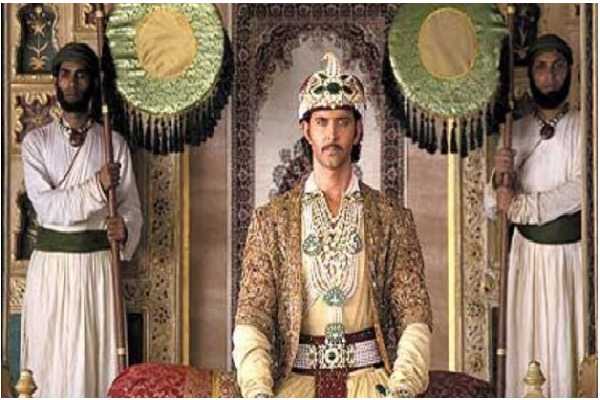 Music: A.R Rahman
Lyrics: Javed Akhtar
Singer: Bonnie Chakraborty, Mohd Aslam
Movie: Jodhaa Akbar
“Azeem O Shaan Shahenshaah” was recorded over a tiring period of 15 days. This melody has plenty of interesting stories revolving around it, just like “Pyar Kiya Toh Darna Kya”. A budget of almost 2.5 crores was spent just for this one track in the movie.

The dancers were taught by Prakash. Twelve assistant choreographers taught 400 dancers and there were an unbelievable, unimaginable number of 2000 extra crew members acting to be the trustworthy residents of Agra city. Many of the dance steps were taken from old cult movies like Guide and Ganga Jamuna.

Hrithik looked exactly similar to the real Mughal emperor Akbar. Rahman’s composition sounds like it has come straight from Mughal history. The music is brilliant in every sense of the word and Javed Akhtar’s lyrics glorifies Mughal emperor Akbar and Bonnie Chakraborty as well as Mohd Aslam’s alluring voices seem to paint exact images from emperor Akbar’s Diwan-e-Aam for the commoners. 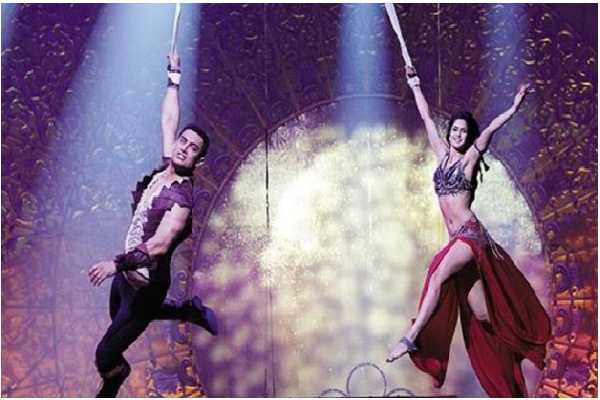 Music: Pritam
Lyrics: Sameer Anjaan
Singer: Shilpa Rao, Siddharth Mahadevan
Movie: Dhoom 3
Did you watch the official Malang video? Dhoom 3 might not have been of any interest to many after the repetitive 2 parts, but it was a smashing hit. The song video is a delight for the senses. It feels like you are sitting in your school theater watching a show running in the front. The visual effects appear to be straight out of a 7 dimensional film.

Amir Khan had to twist and turn 60 times in a minute for the song which is a very big deal. Even Katrina could be seen spinning at high speed like a live firework. There were 200 gymnasts brought in from America to Mumbai. Their terrific gymnastics will blow your mind away. Can you guess how many days it took to shoot the entire thing? It took around twenty days which is too long compared to any normal Bollywood song.

Most Expensive Song of Bollywood 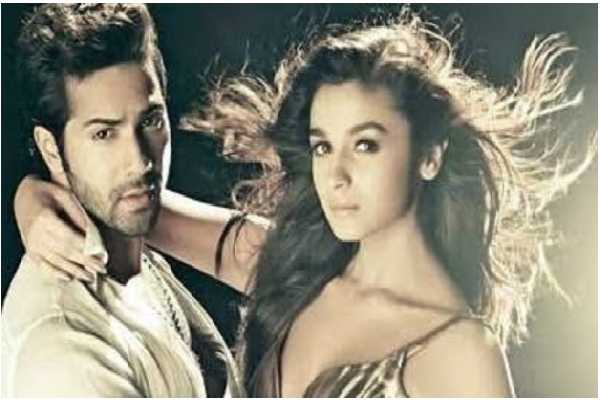 After it’s first release, Indeep Bakshi performed it at various occasions like college fiestas and all. It would be a lot of fun to watch him perform “Saturday Saturday”! The glitz, glamour, light effects, props, foreign crew and special effects lighting up an entire stadium is worth all the money. The best thing is that it is not just played on Saturdays, even night clubs and discs play it almost every day including a Saturday. Our talented Badshah’s the rock star with his mesmerising composition and heart stirring lyrics. Sharib Toshi and Titans supported him a lot with the composition. 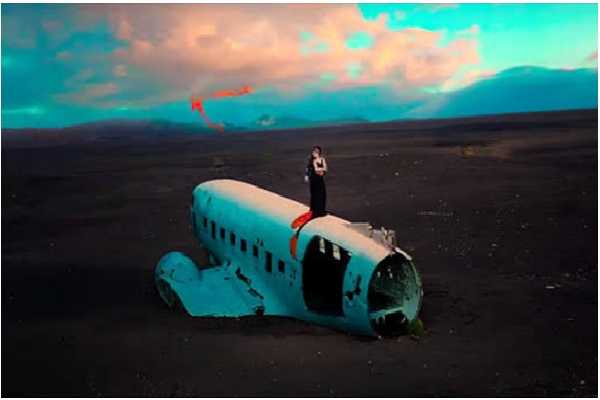 This one without any doubts, has to be the costliest song ever shot in the history of Bollywood. Shahrukh and Kajol can be seen romancing at some of the most jaw-dropping locations in Iceland. The locales look completely supernatural and they seem to have been created using VFX technology but they are NATURAL.

You’ll feel that each of the shooting locales has emerged out of an ancient fairytale from some remote corner of the world. The first one is the left out plane placed on the black sandy beach. The rainbow waterfall in the south of Iceland is called the Skógafoss waterfall. Shahrukh and Kajol appeared mesmerising in front of this waterfall. You must have heard of the legendary tale in which you find a pot of gold at the end of the rainbow. This rainbow looks just like that. The other breathtaking places are Reynisdrangar rocks, where Game of Thrones Season 7 was captured, the Seljalandsfoss waterfall, also known as the curtain waterfalls, Stokksnes, the place where you can walk on water and the Jökulsárlón glacier lagoon covered with tiny glaciers in a breathtaking blue.

Good Songs and Music Videos are always worthy. The money spent on these songs gave great results. All the magic that you can hear and watch is worth lots of bucks, but it’s not just the money that makes them expensive. The passion and dedication with which they were created is more expensive than anything else. To know more about such stories from Bollywood Music and remain updated on Music trivia, subscribe to the Gaana Pehchaana blog. Install the Gaana Pehchaana app from PlayStore or AppStore for exciting Bollywood Musical Games and Live Gaming sessions!

What Gaana Pehchaana Has To Offer To You?
Gaana Pehchaana makes you aware of all the hard work put in by music composers, singers, lyricists, instrumentalists and everyone else who work hard day and night to turn our Bollywood movies into sensational hits. Bollywood movies cannot become what they are without the songs, so it’s time to salute these people who create the mesmerising melodies. We have musical guessing games where you can select your decade and difficulty level, live games, trivia, facts and stories that reveal a lot about the Hindi Film Music industry on the Gaana Pehchaana app. These are just tributes to the masters of music. Install the app on your android and iOS devices to enjoy all that Gaana Pehchaana has to offer.

How to Upload Movies on YouTube Without Any Copyright Issue