A Beach in Burma 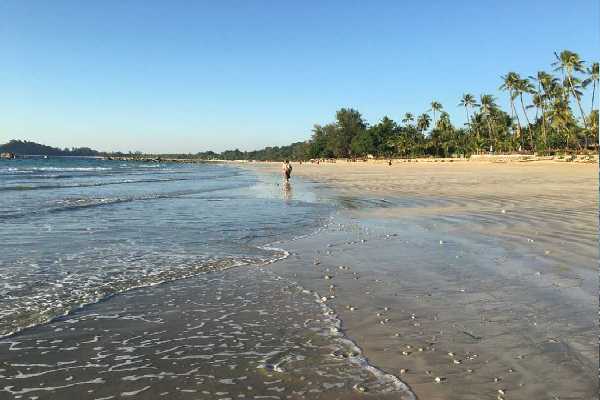 Flying from Rangoon I begin to realize we’re headed for something different. The landscape below is untouched by modern development common in Asia. I see nothing but lush green hills in the horizon. Soon this emerald forest gives way to a string of yellow sand and the turquoise blue of the Andaman Sea. e have arrived at Ngapali Beach, where the most difficult item on the itinerary is simply pronouncing its name correctly. In colonial days, Ngapali was the beach destination of choice for the ruling British. Now that Burma opening up after decades of sanctions and self-imposed isolation, could those days come back? Democracy icon Aung San Suu Kyi has welcomed the advent of responsible tourism. So her country looks set to be the next major tourist destination in Southeast Asia, with Ngapali Beach as a major attraction.

We are here for an old school beach holiday. There will be no jet skis, full moon parties or noisy girly bars that infest the more popular stripes of sand in neighboring Thailand. The wildest activity on offer is snorkeling, the most exciting experience is probably the crime novel read on your lounge chair, and the only hedonistic pleasure is Burmese cuisine. On arriving we walk down to the sea, which exudes a sense of calm.

A fisherman wades out of the ocean, net in hand. A woman in a longyi passes with a basket of pineapples balanced on her head. A beach side restaurant offers a chance to meet other visitors, including Olav Rise, a 53 year old Norwegian acupuncturist and Swedish doctor Anna Ekvall. As with many other tourists, they have put Ngapali at the end of their Burma trip. They have already seen magnificent Bagan, its valley dotted with thousands of pagodas, the magical Inle Lake and the colonial side of old Rangoon. Now, they are ready to relax. “This is paradise. The only thing we do is eat and Sleep,” Rise tells me. It’s true, he says, what many say about Burma. The country’s historical sights, its ethnic colour and natural setting are all spectacular, but what stands out the most are the people.

Along Ngapali though, change is in the air. “It’s like Vietnam 10 years ago, says Ole Rehlander, resident manager at the Bayview Beach Resort. A building book is about to start. Several hotels are already under construction but, the hotelier he is, Rehlander says the tranquil atmosphere will not disappear. For now, there’s something behind that sentiment: prices here are high because of the remote nature of the beach; the road from Rangoon is in bad shape; and, unlike at many beach resorts, the government has banned loud music. Actually, that last point isn’t a bad thing as most visitors come simply a relax.

The weather is perfect. Not too hot, not too cold. Like a second skin. We’re headed down the eight kilometre long beach, stopping to watch some kids kick around a rattan ball. The simple pleasures of beach life. After a spell, we continue on down the coast though not before a young man runs after me. Smiling, he simply holds out my camera, which I forgot in the sand.

At the end of the beach, we wade out to the Pleasant View Restaurant located on a tidal island. We wash down juicy barbecued prawns with bottles of Mandalay beer as the sun settles into the sea. Two gigantic bats bly overhead and continue on into the jungle. Back in the 1920’s, George Orwell wrote of Burma: “..all you can remember is the bloor-red flowers of the hibiscus and the flying foxes streaming overhead.” I now know that feeling.

In many ways little has changed since orwell’s time. Out on the sea, a string of boat lamps bob along the distant horizon: fisherman heading out for the night Ngapali’s tranquility is taking hold. The atmosphere is relaxed, the restaurant guests talk and laugh but all in a subtle way.

Later, we not off to the sound of waves gently breaking in the Andaman. I wake at daybreak feeling completely refreshed. The beach is bathed in a pinkish hue. After a quick breakfast of honey pancakes, we set out to explore a nearby fishing village. The colourful fleet has just returned from its nocturnal exertions. Paris of fishermen jump into the water, hoisting baskets of ish between them on bamboo poles. The soft morning light shifts through the palm trees only adding to the tranquility. On the beach, village women wait for the men to bring up the catch. Under lampshade rice hats, their faces are painted with thanakha, the yellow bark powder that the Burmese use for sunscreen. Soon a glittering field of silver sardines covers the woven palm leaf mats.

Leaving the beach behind we enter the village, but that sense of timelessness continues. Palm thatched houses line the dirt track. Chickens and pigs road around. There is no running water and electricity is scarce. That said, there isn’t any traffic either. People welcome us with smiles and the Burmese greeting. “Mingalaba,” but are never pushy. Inside the houses children busy themselves with their homework under portraits of the Buddha and Aung San Suu Kyi. We continue up a hill next to the village. There, with a stunning view over the ocean, is a golden pagoda. The chirp of crickets fills the air, which is sweet with the smell of lemongrass. Along the dirt rad back to our hotel, monks in crimson robes are collecting their morning alms.

As expected, in the evening we have a Burmese seafood dinner at a resort. Burmese cuisine reflects the country’s geographical location, squeezed as it is between India, Thailand and China. There are the curries from the subcontinent, lemongrass infused dishes from Thailand, and Chinese soy and noodles.

We start with a traditional spicy fish soup with hints of turmeric. It is spicy but without the numbing fire of the Thai tom yam goong. We then dig into a gorgeous seabass marinated in lemongrass. Simple food in a simple place.

As we eat, a full moon rises over the sea. We’re completely at peace. The newspaper states that today’s date is the 14th waxing of Pyatho 1373 ME, and the main story is about an auspicious, white elephant. Burma, while appearing on the world’s radar again, still feels very much a world apart.