Wind Power is Fuel provided Free of Cost by Nature! 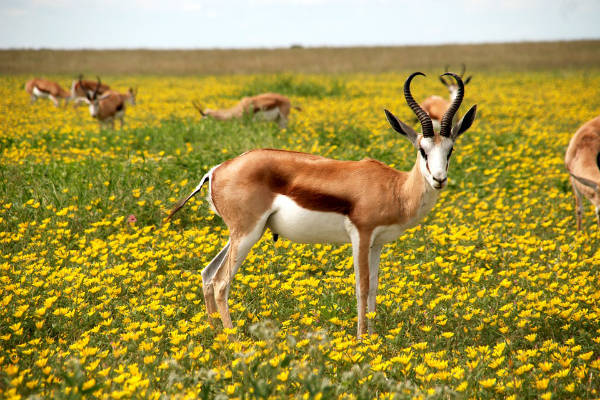 Wind energy or wind power is a form of solar energy; it is the process by which wind is used to generate electricity. Wind is caused by uneven heating of atmosphere by the sun, variations in earth’s surface, and rotation of the earth. Mountains, bodies of water, and vegetation all influence wind flow patterns. Wind turbines use air flows to convert kinetic energy in the wind into mechanical power by rotating propeller- like blades around a rotor. The rotor turns the drive shaft, which turns a generator and mechanical power is converted into Electricity. Wind speed, air density, and swept area affect the amount of energy a turbine can harness from the wind. Wind power, as an alternative to burning fossil fuels, is plentiful, renewable, widely distributed, clean, produces no greenhouse gas emissions during operation, consumes no water, and uses little land. Wind power is as such a logical choice for cheap, clean fuel; but the devices cost money.

Wind turbines have been in use since at least 200 BC. Wind power development in India began in 1986 with setting up of wind farms in coastal areas of Ratnagiri in Maharashtra, Okha in Gujarat and Tirunelveli in Tamil Nadu with 55 kW Vestas wind turbines. Ministry of New and Renewable Energy (MNRE) supported these projects. In the last decade, it spread to other States that have any wind potential — four other southern states, M.P., Maharashtra, Gujarat and Rajasthan. Wind power generation capacity in India has significantly increased in recent years. For the first time, wind power installations (windmills) crossed the 5GW (Gigawatt) mark, to reach 5,400 MW in 2016-17 and with this the country’s wind power capacity stands at 31,177MW. With 31GW, India has the fourth highest wind installations in the world after China (145,362 MW), US (74,470 MW) and Germany (44,947 MW). The government aims to see 60,000 MW or 60GW by 2022. Wind accounts for 10% of India’s total power capacity of 3.2 lakh MW; and 4% in terms of electricity produced.

Wind industry observers feel that 2017-18 will be good as the current year might see installations of 6GW. In addition to the demand from the eight windy states, the central government has begun auctioning the capacity, buying the power to sell further to states without wind potential. It is expanding the market. Already, 1,000 MW capacity has been auctioned in the first-ever auctions of wind power capacity, that were held in February 2017;  the price at which windmill owners would sell electricity to companies that supply power to consumers fell to a record low of ₹3.46 a kWh. This record low tariff at ₹3.46 per kWh of wind power is without any direct or indirect subsidy by the government. Earlier the wind power prices were fixed by the various state electricity regulatory commissions.

Wind Power is used in homes, farms and industries. It is a clean, non-polluting source of energy. It is inexhaustible, since winds blow every day and can never be used up. This energy is free as the fuel is provided free of cost by nature. Like the Sun’s solar energy, it is naturally blowing winds that give us this energy. However, the sun’s energy is generally available in a steady stream through the day but winds are not so steady. They are intermittent and their speeds vary at different times of the day. The energy produced by wind turbines depends on wind speed, location, air-temperature and the season.

Benefits of Security Cameras at Home