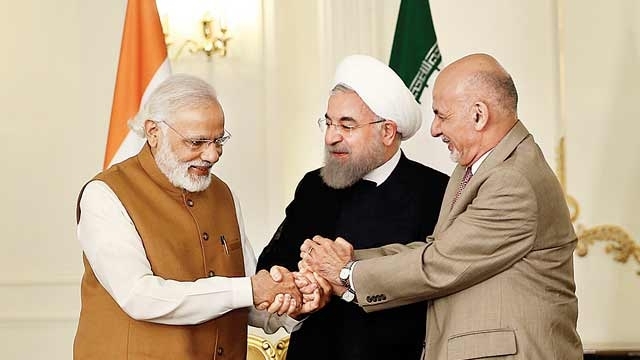 In May 2016, during Prime Minister Narendra Modi’s visit to Iran, a trilateral pact was inked between India, Tehran, and Afghanistan. The pact envisions the development of a Transit and Transport Corridor across the three nations using the Chabahar Port as a regional hub.

Chabahar Port is of special interest to India because of its strategic location outside the ‘energy-rich’ Persian Gulf. The port, situated in the Sistan-Baluchistan province, is the only oceanic port of Iran that can be easily accessed from India’s western coast, completely bypassing Pakistan.

Following Prime Minister Modi’s visit, the President of India, as well as the cabinet ratified the trilateral pact in December 2016. According to government sources, Afghanistan has already approved the pact in its parliament, but Iran is yet to finish their internal processes of ratification.

Recently, on August 5, 2017, Union Minister Nitin Gadkari, while on a deputation to Iran at the oath taking ceremony of President Hassan Rouhani, told PTI that Chabahar port would serve as a gateway to golden opportunities as it would open up wide-ranging possibilities and forge a “win-win situation” between India, Iran, and Afghanistan. The port, according to the minister, will attract investors and boost trade across all the three nations.

“Talks are on for building railways and roads through Chabahar till Afghanistan, and then, we have access to Russia,” Nitin Gadkari said. “We are hopeful of the ratification of Trilateral Transit and Transport Agreement by Iran, and once approvals are given, the work will start.”

As per the MoU signed between India and Iran in May 2016, India will initially put in a capital investment of USD 85.21 million, besides pumping in USD 22.95 million annually for a term of 10 years. On completion of 10 years, ownership of the equipment will be transferred to the Iranian side, unless the lease is extended based on a mutual agreement.

As specified in the MoU, two berths in the Chabahar Port Phase-I have to be made functional within 18 months after signing of the contract. The Iranian government, in accordance with the MoU, had requested for provision of a credit of USD 150 million, which has been cleared by the Indian cabinet in the last year and facilitated through Exim Bank.

Nitin Gadkari’s visit to Iran is of tremendous significance as India is keen on accelerating the work process at the Chabahar port. Civil construction work at the site has already started, and tenders have been floated as well for the installation of key equipment. “Once the port becomes operational, it will become a growth engine,” Union Minister Gadkari stated.

I script pieces on emerging defense technologies, the Internet of Things, Cloud Computing, Memory, Display, Fin-tech, and a variety of other topics that are increasingly evolving in this digital era. I take up research sincerely so that every article of mine resonates perfectly with its audience.

My content solutions include Press Release, Blog, and Article creation along with other value-for-money offers like spinning and rewriting.