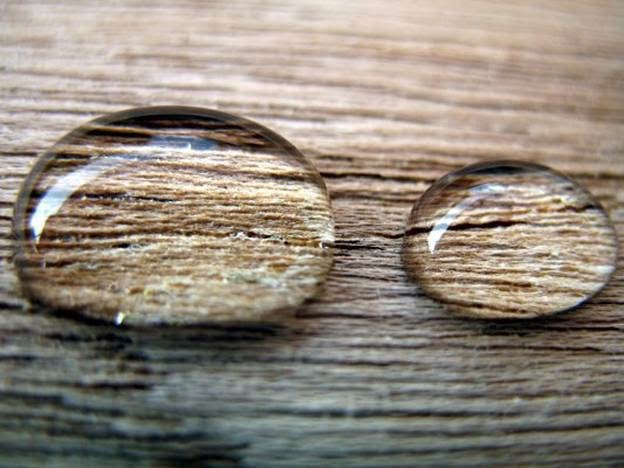 With development of newer technologies every day, what was fiction yesterday is a fact today. Consider the case of lasers. It was conceptualized in science fiction before it was actually developed and today we know that if any idea presents itself, it can be soon be made into a reality.

One such dream is of water proof surfaces. Or rather surfaces that do not get wet. Imagine clothes that never got wet in the rain, glasses that never fogged up, or mobile phones that do not short out on getting immersed in a liquid. Such scenarios open up a whole new world of applications. Such an effect is possible with the help of superhydrophobic coating which is as thick as half a nanometer.
Such effects do occur naturally on certain leaves and stems. The leaves of a lotus have this effect in the most visible form. On observing this effect under an electron microscope, it was found that such an effect is possible where the surface energy is less. Such a surface is one where there are fewer undistributed electrons which attract polar liquids like water. The nanocoatings form a very thin layer and prevent water particles from sticking. As a result water particles form droplets and simply roll off. And a huge plus is that it picks up any loose particles on the surface like dust and keeps them clean. This also means that such surfaces are really difficult to stain.  Sounds like a dream, does it not? Self cleaning materials. Additionally when complex circuitries of electronic devices are given this water resistant coating their longevity is increased as you decrease damage due to immersion.
These coatings have been around for some time now and here are some really cool things that have been achieved with superhydrophobic surfaces.
Superhydrophobic Self-Cleaning Dishes
Yup, you heard it right. There will be no more quarrels over who will do the dishes because the dishes are now going to do themselves. Since water molecules do not stick to the surface and the major part of the foods means that there will be significantly less staining. Swedes Hanna Billqvist and Anna Glansén have designed a plate and bowl to be impervious to both liquids and dirt. The coatings are completely natural and work well with both water-based and oil-based foods.
Superhydrophobic Phones
The world’s first true superhydrophobic phone has been launched by the little known Indian mobile phone manufacturer called WickedLeaks has entered the fray with its Wammy Passion ‘X’. The device has a proprietary superhydrophobic coating known as Aquaprotect on both internal and external components that help it survive splashes and dips that would kill other phones instantly. It can survive up to 30 minutes of immersion. Apart from this the phone comes with MediaTek’s true Octa core processor which is also a first.
Molecular motors
Ben Feringa and co-workers have discovered controllable superhydrophobicity with light-activated synthetic molecular motors at the University of Groningen in the Netherlands. On activation from a light source the surface of the material becomes hydrophobic and on removal of light it becomes a normal surface. This can be a very useful option when superhydrophobicity of a surface need to be controlled.
Summary:
A superhydrophobic coating on the right surface can revolutionize the work process on that surface. There are some really amazing applications for a surface that actively repels liquids.
You might also like
Home Improvement

3 Home Repairs You Should Never Put Off

7 Tips for Packing Your Home Into a Small Space

6 Trendy Doors You Can Install in Your Home

Easy and Low-Cost Ways to Protect Your Home